Percussion Guitar Music
is based on African and Afro - Cuban rhythms and by imitating archaic percussion instruments.

KALIMBA
is the name of an African " thumb - piano ". Wooden tongues of different lenghts are attached to a wooden sounding box. The tongues are plucked with the thumb. The kalimba - sound is imitated on the guitar by inserting a handkerchief underneath the strings next to the Bridge, thus damping the strings. The ratling drone of the bass - kalimba is effected by touching the two bass strings after having crossed them. One of the traditional music arts of Ghana makes use almost exclusively of bells- the

KANGOGI
Gentle guitar harmonics are used to weave the tissue which characterizes this music. This piece, composed symmetrically, leads into the middle part with typical Afro 6/8 rhythms and ends with the same binary measures which comprise the opening pattern. The

BERIMBAU
was first brought to Brazil by slaves from Angola in the 15th century. lt resembles an archers bow with a metal string. A hollow calabash is attached to an arched piece of wood as a sound - body. The sound is produced by striking the string with a thin wooden stick. Vartiations of tone and timbre are produced by pressing a flat, smooth stone against the string in different positions. To achieve the sound of the berimbau on the guitar, the strings are struck with a thin stick, while the fingers of the left hand serve the function of the stone.

This is a very interesting piece and well worth seeking out, the chances are you won't have played anything quite like it. The piece is based on African and Afro-Cuban rhythms, the sound palette imitating archaic percussion instruments; the sound of the Kalimba, an African 'thumb' piano, is made by putting a handkerchief under the strings of the guitar. This, along with other carefully worked out timbres, goes to make a fascinating soundscape that sometimes lies outside the realms of the guitar. While emphasising the rhythmic nature of the piece the melodic invention is also full of interest. Well worth the effort of searching this out. If you have a quartet then give this a go. 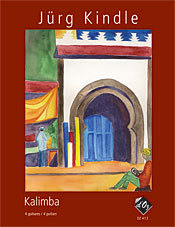