The history of human activity in Chincoteague, on the Eastern Shore of Virginia, begins with the Native Americans. Until European settlers possessed the island in the late 17th century, the Chincoteague Indians used it as a place to gather shellfish, but are not known to have lived there; Chincoteague Island lacked suitable soil for their agriculture. The island's name derives from those early visitors: by one popular tale, chincoteague meant "Beautiful land across the water" in their language.

The Trio is influenced by Native American spirit.Soft drumming and hypnotic pattern let you immerse in this magic island.


score available in the shop
www.editionkalimba.ch 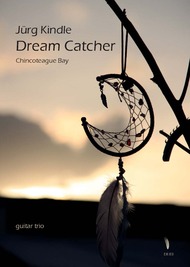