As part of the Guitar Festival Alla Grande in March 2010, guitar students from the Conservatory of Music Gatineau and Ottawa University presented a concert entitled "Music of Oz: new horizons", performing pieces for guitar ensembles as well as solo pieces published by "Productions d'Oz" in order to discover new pieces and new composers in the classical guitar repertoire.

Students from the Conservatory of Music in Gatineau, with the help of a student at the University of Ottawa, played the 9 movement piece entitled "The Planets" by Jürg Kindle in an original concept: interpreters were positioned somewhat randomly on stage and played each of their own movement of the piece, being represented by a planet in the solar system. A projection of their planets also added some visual, creating an ideal atmosphere for the play.

"The Planets" Kindle is a piece of 9 movements representing the nine planets of the solar system in their respective order. Every movement shows a unique character, expressed by various techniques of the guitar. The result is a work of very inventive writing, accessible to a wide audience.

“Les Planètes is a nine-movement work, each movement representing a major planet from our own Solar System and appearing in the suite in order of distance from the Sun. Each one of the individually published pieces which make up this edition have all received separate reviews in the past from either myself or my colleague Chris Dumigan and as far as I can recall they have all been blessed with favorable reviews. Suffice it to say that here is a large-scale work for solo guitar containing some fine, clever, descriptive and inventive writing for the instrument and one which could provide one of the high-spots of any recital if played with enough conviction. Slight problems may arise in a couple of places due to the preparation involved. Jupiter for instance requires an “open” tuning of, from bass upwards, D, A, D, A, A, D (for ease of reading the piece is also given in Tablature) then it’s back to standard tuning once again for Saturn, a percussive piece requiring ten notational instructions. For the final movement, Pluto, the guitarist needs to insert a matchstick underneath the strings near to the bridge.
Is it all worth the effort? Well, yes it is. Compared to the soundscape which Gustav Holst created with his masterpiece for orchestra, Les Planètes doesn’t come close, but taken simply for what it is, a solo instrumental, the piece makes for highly entertaining listening/playing.
It is nicely presented with clearly printed notation, well fingered and an attractive front cover. Buying this complete album of the pieces rather than the individual productions will give you a saving of approximately 36 Euros.
Not to be sniffed at!”

Like its companion Mars, this movement has no speed marking. A quick play through however implies that is to be played slowly and sensuously.
It begins in two voices on a sort of C6 arpeggio up around frets 7 and 8 utilising various open strings along the way.

A gentle time change from 3/4 to 2/4 every few bars just adds a little extra to the feel along the way. The music sways gently along for a while but soon moves away from its C major beginnings and moves through Bb past C to D major and further on to E major, where it stays for a while before the opening melody returns but now in Bb. Not that this is a restatement in a new key because it develops swiftly, never actually repeating the melody note for note, but delights in sudden tonal shifts to remote chords and keys before finally, and almost seemingly accidentally, finding its way back to C major one more time for the fmal restatement of the opening idea. A strangely exotic chord based around a C but utilising G#s, brings the work to a quiet close.
This is the first of the Planets set that stays in one mood and speed throughout its duration. It relies on surprise for much of its appeal and as such is a delightful piece with much going for it. It is perhaps not as difficult to play as some of the others although the need for a sustained and constant legato flow takes it out of the realms of easy. Nicely printed as always.

The third in this continuing series is devoted to Holst's Bringer of Jollity, Jupiter; although, l have my doubts as to whether our composer here feels the same about Jupiter as Holst did.
The piece is entirely to be played in a very strange tuning 1st to D, 2nd and 3rd to A, 4th to D, 5th to A and 6th to D, but before that has you racing for the nearest exit, let me explain that Kindle has kindly included a tablature underneath the notation.

What first strikes you is that it spends 90-per-cent of its time running around in quaver arpeggios and as a result becomes very folklike in places. The odd arrangement of open strings creates a very individual atmosphere, which continues for some four pages or more, before a Liberamente interrupts the flow, if not for very long. Then a sudden Allegro Molto consisting of a new idea largely built up from hammers on and pull-offs, again sounding very folk-like in construction, which suddenly puts on a spurt and becomes prestissimo. A second liberamente leads to a return to the opening sections once more and finally to a coda that dies away on a repetitive arpeggio sweep up and down the strings, fading gently into the distance.

Mars begins around an octave D idea using a detuned 6th, the open 4th and the 5th fret of the 5th resounding against one another. Add in some pull-offs to an A and some hammer-ons from a C to D and you get the basis of the first idea.

Although there is interestingly no speed marking given, the music implies speed from the word go. There are a few triplet runs interspersed before a time change to 14/8 gives an added frisson to the score. For a while 4/4 and 14/8 interweave until a harmony line gradually emerges below the melody in 6ths. Then violent open Ds and As interrupt the melodic flow and now the time signatures become more varied, with 9/8, and then 11/8, 7/8, 10/8, and 16/8 all making an appearance. At bar 59 the tonal weight shifts to a modal sort of A major for a while with a new idea before the opening idea re-emerges unchanged for an almost complete restatement of the beginning. Then a sudden piano on a Bb major chord leads to a fortissimo run and a loud glissando from fret 12 on a modal D chord to finish.
This was an exciting piece with lots to say and needing a certain standard of player to do it full justice, but like its companions in this nine-movement set (if it is indeed a set) it is great fun and is utterly involving music to play.

This tiny piece is marked prestissimo, so you know you are in for a really tough ride, technically speaking, especially when you try to negotiate the multiple hammer-ons and pull-offs that are an integral part of the main idea.

Interestingly the directions underneath the score say tasto to ponticello ad-lib and cresc. to dim. ad lib, leaving quite a lot to the performer right from the outset, especially as you are instructed to play the first ten bars for about ten seconds each. After that several of the bars are repeated four times making this opening idea very hard on the brain and fingers (well, mine at least!) Then about half way through one has to play a visually alarming top line on imaginary frets between the sound hole and the bridge, whilst hammering on with the left hand only a lower harmony line, before then pulling the note off to an open string. A brief return to the opening idea only brings yet another excursion into the imaginary frets area, before one leaves the accompanying lower harmony line behind, and the player is instructed to continue on the imaginary frets, flying around for 20 seconds before disappearing into thin air on a diminuendo to silence.
This was yet another interesting excursion into the enjoyably exotic. The six pieces l received for review (out of the full total of nine) all proved well worth playing and one hopes that someone somewhere will take them up as a set.
l look forward to their recording soon!

The arrivaI of this new edition through the post basically led to
answering a question I posed a while ago when I reviewed this
composer's work Terre (Earth). I noticed that Jürg Kindle had already
composed Saturn and wondered whether we guitarists were going to be
treated to a mini “Planets Suite”. Well, a quick check of the
publisher's web-site now reveals that we do indeed have the nine major
planets which make up the Solar System.

I remember finding the other “planets” rather enjoyable and was
looking forward to hearing more of the same and it is good to report
that Pluto does not let the side down. With this planet being the
farthest from the Sun, one would expect some “distant” sound effects
and the composer does not disappoint. This effect is brought into
being by the insertion of a matchstick through the three bass strings
throughout the length of the work giving each note played on these
strings a somewhat “hollow” resonance.

The work itself has a very rhythmic drive, typical of this composer,
and concludes with a fade-out ending reminiscent of the closure of
this suite's bigger brother by Holst. If the rest of the planets are
as interesting as the two I am acquainted with, I really look forward
to hearing the work in its entirety.
The presentation is very good and the work would be suitable for the
Intermediate player. 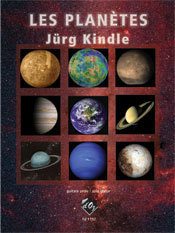