GOSPEL for 4 guitars
by Jürg Kindle
Opening a new ensemble for review always brings the unexpected. So, guitars at the ready - let’s try it. Slow bass, chromatic chords, syncopated top line, some bluesy chords. OK, so it’s a 6-bar intro.
A disco-like bass line underpins line choral chords formed from the upper three parts, and there are plagal cadences that bring to mind those massive gospel choirs of jigging bodies belting out simple yet uplifting chords. Taking everything up an octave and using it as an echo never fails to work, and the opening theme reappears to welcome a centre section that will cause a few beads of sweat from Guitar Four. Having said that, Guitar Four’s perspiration come from playing the phrase to die for with a slowly ascending arpeggio bass that gets louder and louder, so I know it will have been practised over and over - it’s such fun! And that leaves us with the reprise of the various components, culminating in a lovely downward bluesy run.
The standard is probably Grade 3-4. There is no fingering, and some of the diminished chord shapes need working out in advance so they’re under the fingers. But there’s nothing scary here. Although the syncopation is a little complex to read for someone with limited ability, it’s an easy one to copy having heard it, and the parts lock tightly together with well-defined beats that will ensure nothing comes unzipped. The writing is simple, but not twee, and I think school ensembles will not only enjoy this in concert, but will find that its structure is really quite amenable to being able to practise one line at home.
Derek Hasted (Classical Guitar Magazine) 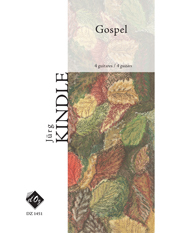